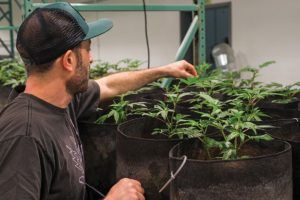 You might question the wisdom of Matt and Meghan Walstatter’s decision to leave Portland’s crowded dispensary scene to start a cultivation site in Oregon’s saturated market.

The husband and wife team opened Pure Green in January 2014, when there was only one other dispensary on their street. They built it into one of Portland’s most popular marijuana stores. But by 2018, they were competing against at least 10 other nearby stores.

“It got to be a grind,” Matt Walstatter said.

Meanwhile, the Walstatters teamed up with veteran cultivator Bob Conley, whom they’d known for 20-plus years, on Siren Cannabis, a Portland-based grow. The 8,000-square-foot facility had about 2,000 feet of canopy, and the first pounds of flower were ready for the wholesale market in December 2018.

“We probably couldn’t have come out on the market at a worse time,” Matt Walstatter said, referring to what was then an oversaturated market for flower. “It was so bad. I didn’t sell a single pound. In January 2019, our price for indoor (grown flower) was $600 to $900 per pound. And I had to figure out how to stay in business,” Walstatter said.

He also took a gamble. “My view was that this was going to be the peak of market saturation and that the market would ultimately work its way back up, which turned out to be right,” Walstatter said. “Now we’re getting $1,800-$2,000 per pound.”

Produce a great product while keeping costs down

The fledgling company had two secret weapons that helped it stay in business:

“I think we grow something that can sit on any shelf in any store in the state. I’m not trying to claim that mine is the best or anything like that. But I think we’re in the upper tier,” Walstatter said. “My partner, Bob Conley, who runs all cultivation operations, does more with less than anyone else I know. So our production costs are a lot lower than at other grows our size.”

Siren operates 70,000 flowering lots in 2,000 square feet of canopy with Conley, one full-time grow employee, one part-time employee, five or six full-time trimmers who help elsewhere in the grow plus one administrative person and one sales manager.

Design your facility to improve workflow

The lean team operates in a facility designed to maximize efficiency through workflow. For example, the vegetation room is across the hall from the flower rooms, and the trim room is across from the drying room. Designing the building that way reduced the number of steps employees must take to get from one room to another.

“One of the things that you think about is making the building fit the way the workflow is going to go. It may not seem like a big deal to have to take three more steps,” Walstatter said. “But when you multiply those three steps times three people doing the same thing 300 times a day, every week, over years, all of a sudden those three steps turn into thousands of steps.”

The company also custom-built an automated irrigation and fertigation system that eliminated the need for an employee to water plants and clean water tanks.

Take advantage of energy rebates to save money

The company received rebates on all the LEDs it bought, plus the HVAC system, allowing Siren to recoup about 40% of its LED and HVAC expenses. Walstatter noted that the five-figure rebate check arrived when Siren just opened and was getting less than $1,000 per pound for its product.