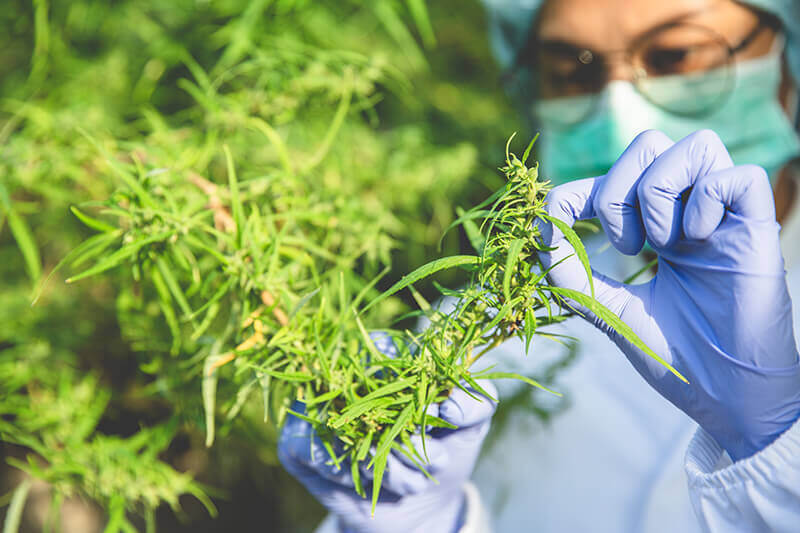 While you may know your edibles from your tinctures when it comes to cannabidiol (CBD), many are confused about its origin. The popularity of CBD has skyrocketed within the wellness industry, as many users have adopted CBD as a regular in their daily routine.

Cannabis-based products have become a staple, among those that want an all-natural way to maintain balance in the body. But where does CBD come from? And why has it become so popular?

CBD is an acronym for a molecule found in the cannabis plant, its full scientific name is cannabidiol, which is one of over 60 other plant chemicals called cannabinoids, that are specific to cannabis.

While the idea of using cannabinoids for wellness might seem like a new concept, cannabis has been a key part of the history of medicine throughout the centuries. Cannabis was one of the first plants on record to be used as a medicine, dating back to ancient China over 5000 years ago and was a prominent part of early pharmacology.

In this post, we will clear up some of the confusion that surrounds the origins of CBD, so you can get a deeper understanding of where it comes from. We’ll cover:

What is the origin of CBD?

Does CBD come from hemp plants?

Where is CBD found on the plant?

Does CBD come from the same plant as THC?

What is CBD made from hemp?

Let’s begin with when CBD was discovered.

What is the origin of CBD? A brief history

The first chemical synthesis of cannabinoids was achieved in the 1940s by American scientist Roger Adams, who first discovered cannabidiol in 1942. For many years this discovery remained undeveloped until, in 1963, the effects of CBD were discovered by Israeli scientist Dr. Raphael Mechoulam. He was one of the first to discover the effects of individual cannabinoids and identified the stereochemistry of CBD. Which dubbed him the ‘godfather of cannabis’

The most scientific evidence to date into cannabinoids is in THC (tetrahydrocannabinol) and CBD (cannabidiol). Dr. Raphael Mechoulam discovered the chemical structure of THC in 1964, and further concluded that phytocannabinoids found in cannabis work together in what’s known as the “entourage effect”.This discovery revealed cannabinoids work in synergy to enhance the benefits and reduce unwanted side effects.

Does CBD come from hemp plants?

CBD can be found in all varieties of cannabis, including indica and ruderalis species, however, the amount of THC varies depending on how each plant is cultivated and bred. Hemp is typically high in CBD and low in THC (less than 0.2 %).

Over the centuries, hemp has been used for a wide variety of different purposes that have given it the name ‘industrial hemp’. From cleaning soil of heavy metals and toxins to making building materials.

Many believe that good quality CBD can only come from ‘marijuana’ which contains a higher amount of THC. This can be confusing for those looking for a high-quality CBD product. But the truth is, the CBD compound remains the same in all cannabis plants.

‘Marijuana’ and hemp are the same plant–cannabis sativa. Their difference lies in their THC content, hemp describes cannabis plants that have less than 0.2% THC.

Where is CBD found on the plant

CBD can be found in both male and female cannabis plants, in the stems, leaves, and stalks. Hemp grows with tough fibrous stalks and is taller than ‘marijuana’ with less flowering buds. CBD content is most highly concentrated in the female’s flowers.

If you’ve ever seen a cannabis flower up close, you’ll notice it has a silver frost-like coating of fine hairs on the buds and flowers. These are called trichomes, which comes from the Greek word ‘Tríchōma,’ meaning hair growth. It’s these trichomes that create cannabinoids, terpenes, and flavonoids that give the plant its distinctive aromas and properties.

The main purpose of these trichomes is the plant defense mechanism against predators and disease during the growth stage.

Does CBD come from the same plant as THC?

All cannabis plants contain THC and CBD. Cannabis sativa can be categorized as ‘Marijuana’ and hemp which are defined by their THC content. Cannabis is a term that can be used to describe both types of the plant–they are both Cannabis Sativa.

In 1937 cannabis officially became illegal in the United States with the introduction of the Marihuana Tax Act. The term ‘marijuana’ was coined to describe cannabis that contains more than 0.2% THC. The word ‘Marijuana’ though widely used, has controversial origins as it was created intentionally to encourage the stigmatization of cannabis as a foreign drug.

Following the criminalization of cannabis, in the decades that follow the plant has become more well known for its “mind-altering” psychoactive effects and recreational use.

Why is CBD made from hemp?

CBD isn’t made from hemp, it’s a compound found in the plant. Hemp contains high levels of CBD and a low level of THC (0.2%), which is the legal threshold for cannabis sativa in the United States.

As THC still remains prominently illegal in most parts of the world anything above 0.2% is considered illegal in states or countries where cannabis is prohibited.

In 2018, the US farm bill made hemp federally legal in America. This meant that hemp and its derivatives were legal under federal law. However, there are some states and countries where CBD derived from hemp is still not legal.

As far as scientific research goes what is known about CBD is still in its infancy, more evidence is needed to fully understand the full effects of CBD.

Hemp continues to be the main source to make CBD oil products. In countries and states where cannabis with THC is still illegal, this is the safest way for consumers to take CBD without breaking the law.

CBD is made by the cannabis plant in the trichomes found on the plant’s leaves and flowers, it can be found in all forms of cannabis but in varying amounts, and is more abundant in the female flowering plants.

Due to hemp’s legality, it is the main source of CBD products. While CBD is not legal in all places around the world, it is widely accepted because of its low THC content. The CBD compound in hemp-derived products is the same as ‘marijuana,’ however, how the process in which the CBD products are made and can affect the quality of the product.

If you would like to know more about how high-quality CBD is produced, you may like to read our CBD guide on how CBD oil is made.

Does this answer all your questions about where CBD comes from? Our team of CBD experts is always on hand to help answer any of your CBD related questions. Talk with our team in the right-hand corner chat box for more information and help with Endoca products.

Our in house copywriter is an avid holistic health and cannabis advocate. Her passion for cannabis grew after experiencing the positive effects CBD has first hand. Over the past two years, while working for Endoca her knowledge and experience of cannabis has grown and she continues to spread the word about the amazing effects of cannabis and cannabinoids.