Tens of thousands of Internet users have become beguiled by a photo that purports to show a hidden cat, most likely because this now passes for spellbinding entertainment in our current reality.

The photo, which was first uploaded last week, allegedly shows the living area and hallway of Reddit user pizzaslayer111’s home.

“Find my cat in this photo,” wrote pizzaslayer111 next to a photo that, seemingly, did not picture any cats, let alone pizzaslayer111’s cat specifically.

But alas, the cat is indeed there, confirming that: A) pizzaslayer111 is not a liar; and B) that pizzaslayer111 should quit slaying pizzas and consider a new career as the successor to “Where’s Waldo” creator Martin Hanford.

Within a week of the post, tens of thousands of Reddit users had scoured the photo with varying degrees of success. But most managed to find the feline, whose face can be seen (SPOILER) poking out from the left side of the door frame.

“I swear that cat wasn’t there the first time I spent 3 min looking,” wrote one viewer.

“That took me a stupid amount of time,” someone else wrote.

But for the thousands of Redditors that were infuriated by the photo, a significant number were absolutely delighted.

“This is awesome,” said another. “Can we do this every week?” 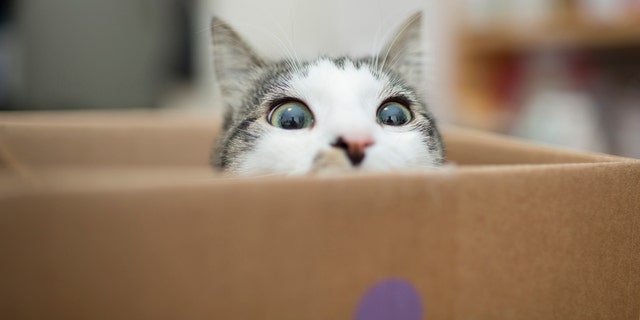 “Can we do this every week?” asked one Reddit user who loved the “find my cat” challenge.
(iStock)

Still, there remains one mystery in the photo, at least for “Toy Story” fans who spotted Woody and Jesse on the bookshelf.

“My question is why are Woody and Jesse wearing each other’s hats,” one viewer asked. “I watch too much Toy Story.”