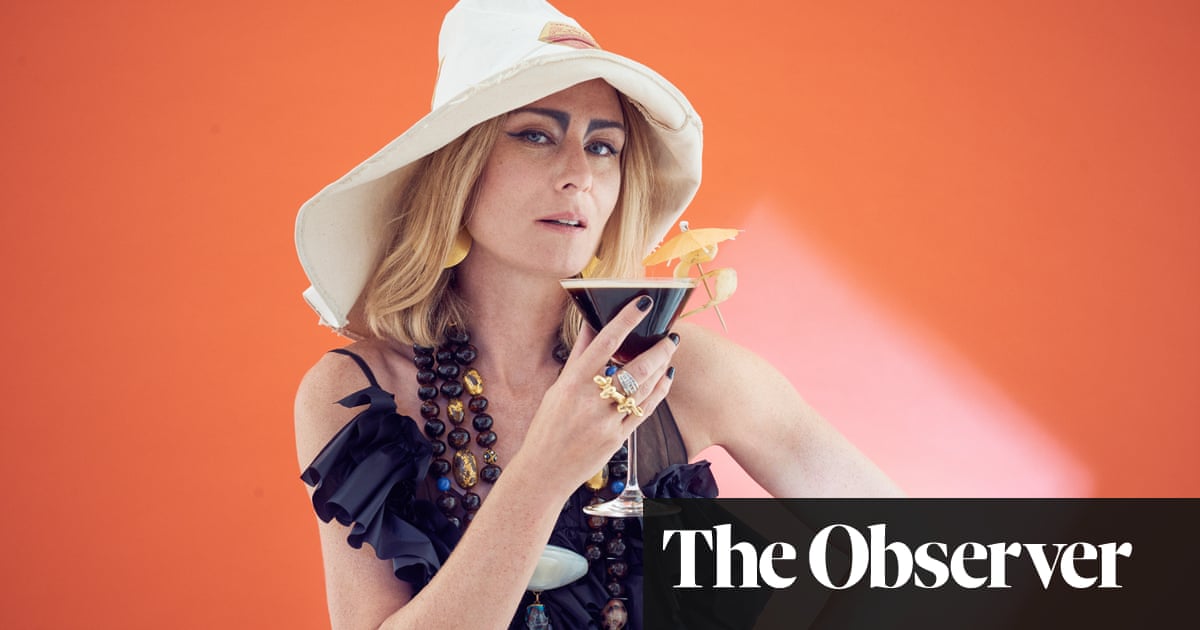 I don’t worry about getting food on my clothes. I don’t have any respect for my clothes once I’m wearing them. But I do really like dressing for meals and floating to the table. I once sat for a big dinner in a bikini.

There was an advert for a department store in the 70s in which Faye Dunaway cooked an egg, cracked and peeled off the shell very slowly and then ate it, with classical music in the background. It’s the best piece of acting anyone’s ever done. I put some of it in Exploitation, the first video I directed. I also did a video for Let Me Know in which I danced through a greasy spoon, wearing a white hat which looked like a plaice.

My mother cooked “good, solid dinner dinners” as she called them, like roasts. I loved her Irish stew – and bacon ribs. And the smell of steamed cabbage is very evocative. My father was very much a bon vivant who had a business fitting furniture in pubs and once brought home a cockpit of a second world war bomber which he put in the spare room with all the clocks and lead scrap. My mum was an antiques dealer and once found two Dutch masters which she sold at Christie’s. It was an interesting upbringing.

I have one sibling – an older brother – who taught me how to make food self-sufficiently more than anyone: pancakes, sandwiches, scrambled eggs, nice cheese on toast. He’s very good with food, Sean, but he really doesn’t like to clear up, our mother says.

I went to a restaurant for the first time when we moved to Manchester. I was 12 and I had my first curry and first kebab, making me crave the next ones. There was food available in Manchester from around the world; brilliant restaurant after brilliant restaurant for a mile on Longsight. When I was 14, my parents went back to Ireland, but I insisted on staying. I ate with a Jewish vegetarian friend’s family and would sit there making sandwiches with broccoli and things they served, and they gave me pots and pans when I got my own flat as soon as I was 16.

I think anything beautiful has rhythm – and humour. I imagine the food from any Michelin-starred restaurant is better for having at least a sprinkling of wit, because they say the closest we get to God is when we laugh. Although it would have to be pretty high wit for it to be traceable in food.

I was in a fancy restaurant, very Parisian, and I said to the waiter, “What’s this andouillette?” and he said, “Sausage.” I said, “I’ll have that” and he said, “Are you sure?” and I replied – really cockily – “Am I sure? I’ll eat anything.” When it arrived it looked really nice but I cut down [into it] and the smell of poo was unnatural. I almost died from that stench, but I tried to eat some. The waiter said: “We won’t charge you. You can have another dish free, because you’ve given me such a laugh.”

In my second pregnancy I was fed like a goddess by my partner; like I’d never been fed before, like a goose being fattened up. I was in Ibiza. I only liked to lie flat on the ground, by the pool, with the heat coming through the towel on the stone ground.

I can’t eat while I’m working. I don’t want a full stomach or to even think about food. If someone puts a pizza in front of me in the studio, I’m either disgusted or I ram it in and try not to think about it. And you have to go on stage hungry, man.

My band and I had great food in Tbilisi about a decade ago. We were there for four nights as guests of the government and played in the square there outside the Marriott hotel for independence day, with tanks all around – just genius.

I was on my own for my birthday this year. I came back to London on 7 July and everyone I knew was away. I’d walked into a cold, empty airport where you couldn’t buy any food and I came back to a cold, empty house and ate beans on toast and sucked sherbet and drank a beer from the corner shop. I’m quite proud that my birthday dinner was so bad. I was proud enough to send a photo to my friends and say: “You think I’ve got the world at my feet, but look at me now.”

Food
I’ve been told – not least by my Italian partner, who’s really taken over in the cooking department – that Italian food is the best in the world. I love simple and rustic pasta fagioli, veal Milanese or a simple tomato pasta with his lovely salad.

Drink
A good wine. I love wine. I don’t really know that much about it; I just know that sometimes I really need a red, but sometimes a white. My partner’s mother lives in a lovely area of Genoa and the wine there is pretty amazing.

Restaurant
This is really show-offy, but I was in Puglia a few weeks ago, at some restaurant I can’t remember the name of, and had a spaghetti vongole which made me cry. I also cried while eating a quite psychedelic zarzuela de mariscos for the first time in some Ibizan restaurant. I even wept about a beautiful potato once.

Dish to make
I’m good at things that require time and timing, like a roast. But I keep coming back to eggs. I’m a super egg fan and they’re scattered throughout my work. I ate a boiled egg – made by my mother – every morning before school.