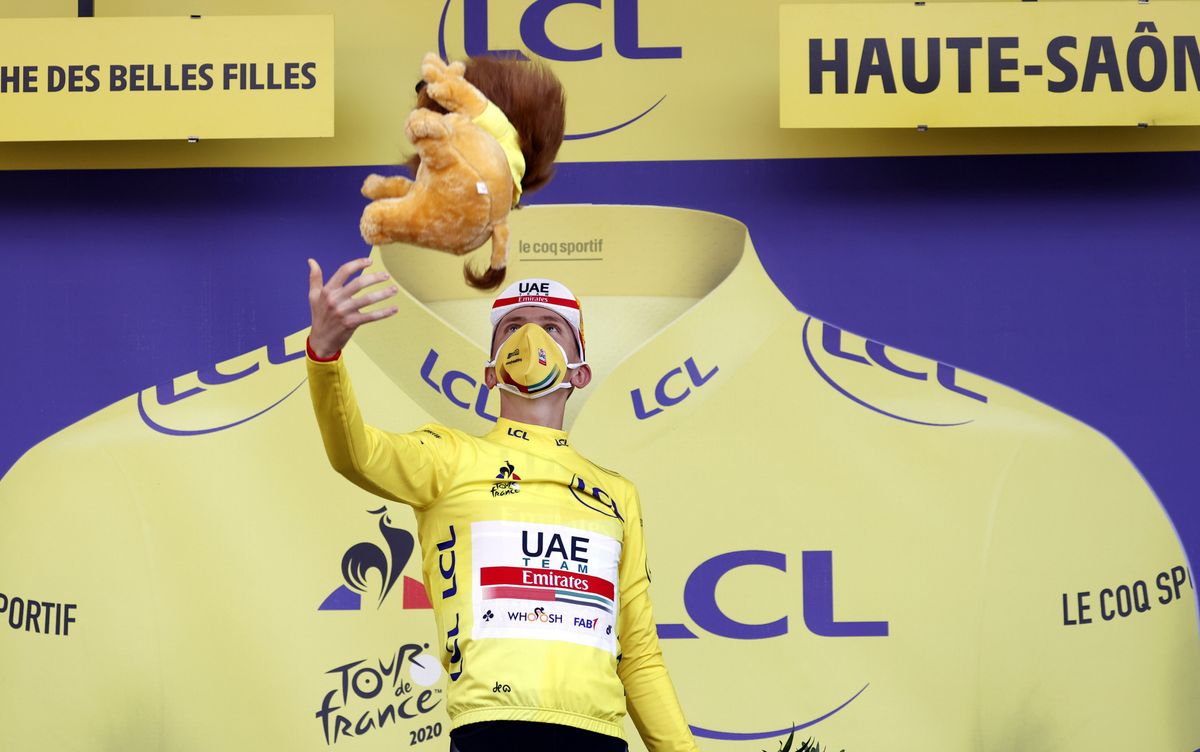 After nearly two weeks looking unflappable in the race lead, Primož Roglič (Jumbo-Visma) was unable to defend his overall advantage of 57 seconds on the stage 20 time trial, suffering badly on a course which theoretically favoured him like no other GC contender.

Pogačar, in stark contrast, looked comfortable throughout his ride on the 36.2km course, gaining 13 seconds on Roglic in the first 12 kilometres, and blasting past Miguel Angel Lopez (Astana) – his two-minute man – with 17.3 kilometres to go.

By the finish, Pogačar had a jaw-dropping 1:21 advantage over second-placed Tom Dumoulin (Jumbo-Visma), having flown up the climb in record time.

In a single, stunning blow, he had clinched the stage win – his third of the Tour – and the yellow jersey, maintained his hold on the white jersey, and also recaptured the polka dot jersey. The latter came from king of the mountains leader Ineos Richard Carapaz, who was seventh-fastest up the climb, 1:12 down on Pogačar’s time of 16:10 up La Planche des Belles Filles.

“For myself I was never thinking about the yellow jersey, because this is the biggest race,” Pogačar said afterwards in a lengthy press confererence.

“But the team had real confidence in me, they knew we could do it. They believed in me and I believed in them. It’s one of the best days.”

As for all the preparation and training that had gone on behind the sences, he recognised” “it went on over a long period, they really planned it well, we did a fantastic job and that was really perfect.”

Then in the race itself, while team-mate David de La Cruz raced injured for almost all the entire race, “Unfortunately we lost Davide Formolo and Fabio Aru, but we didn’t give up. We had a really good team and these three weeks have just been fantastic.”

Asked about the moment when Roglič put his arm around his shoulders at the end of the final stage of the Alps and what he thought, Pogačar said: “I was already thinking about second place in Paris after Col de la Loze. I was solid on second and then today was incredible.”

It was a reversal of epic proportions which will allow Pogačar to head into Paris on Sunday as the youngest winner of the Tour de France in post-war history. It also, curiously enough, fulfils a recent tradition with La Planche des Belles Filles, that every time a Tour de France stage has climbed the Vosges mountain – and this is the fifth time since 2012 – the race has changed leaders on that day.

Pogačar said that although it was him riding to victory in the time trial, his team had had a huge part to play in his win, one small but vital part of the jigsaw being their ensuring he knew what was coming up on Saturday.

“We did the recon. together, I knew every corner, every pothole, I knew where to accelerate because it was a road that you really needed to know.”

He added that after he had caught Lopez he did not bother so much with the time gaps, but while he was listening to his radio on the flat part of the course, he didn’t hear anything on the limb because of the fans lining the road.

“I just went deep, I knew the climb very well, so I went flat out from bottom to top. My dream was just to be on the Tour de France, and now I’ve won, it’s unbelievable.

“I had a white bike all ready for tomorrow, now I’m going to have to have a different one.”

Harking back to the 2019 Vuelta a España, and the fact that he won the stage on the final Saturday there as well, he recognised that his recovery was one key to his ability to do so well in Grand Tours

“It’s genetics. I have to thank my parents for that,” he said with a grin. Although as yet, he said, he could not even talk to them or – indeed, to the President of Slovenia, Borut Pahor, who has apparently been following the race keenly, as one journalist asked – because of poor telephone connections.

“I still couldn’t talk to them because the reception here in La Planche des Belles Filles is really bad, but I was happy to talk to my girlfriend for two minutes and then reception went dead. But I have to thank them, they are the best parents in the world,” he concluded.

At 21, the sky is the limit for Pogačar, and in an indication of his versatility and keen-ness to test the water in all kinds of races, he will take part in the World Championships, he said, then doing Flèche Wallonne and Liège-Bastogne-Liège, before becoming one of the few recent Tour de France winners, together with Geraint Thomas, to have a crack at the Tour of Flanders.

The second youngest winner of the Tour de France, and asked what his first memories were of the race, Pogačar said: “I started watching it back in 2009, I was cheering for Alberto Contador, Andy Schleck and so on. It was great to watch on TV. But now I’m here, and I’m so happy to be here in yellow.”

Told by one journalist that nothing would be the same for him, Pogačar said he would just: “keep on being the same guy. We will keep on racing and we will see what happens.”

For now, in any case, he has conquered cycling’s biggest prize in one of the most surprising outcomes of a Grand Tour for many years.