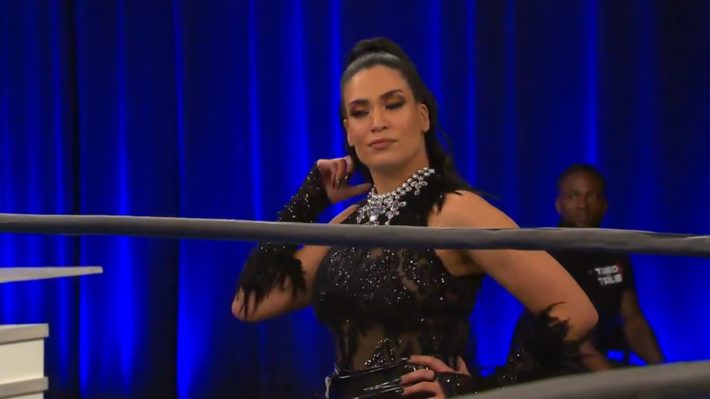 Get real time updates directly on you device, subscribe now.

A name from WWE’s past has popped up in the rumor mill, that being former WWE Women’s & Diva Champion, Melina. The last we’ve heard of her was a recent run in the National Wrestling Alliance, where she challenged Thunder Rosa for the historic NWA Women’s Championship. Amidst reports of her dealing with the NWA ending, rumors are now circulating that she is set for a WWE return.

Potentially Another Veteran For The Women’s Division

With Alicia Fox having left WWE, there is a bit of a drought when it comes to nostalgic names in the women’s division of WWE. They have Natalya, Mickie James, and Tamina at this point, alongside rising and current stars like Bayley, Sasha Banks, Asuka, Mandy Rose & Carmella. Bringing Melina back into the mix would add to this. Outside of that, she’s still an incredible all around talent, being one of the bright and creative minds that made the best of the limited time the division would get before the Women’s Evolution movement in WWE.

PWInsider and other sites have reported she has rejoined WWE, after they were interested in having her return at the 2020 Royal Rumble. This failed due to her dealings with NWA, but the door has remained open for her. She had recently interacted with Robert Stone on Twitter, expressing interest in joining up with the Robert Stone Brand, and was around for the RAW 25th anniversary special.

Like Edge, Karrion Kross, John Morrison, WALTER, Keith Lee, and numerous others before her, now that this news leaked out, Melina has taken to social media to deny these reports. It’s a familiar song and dance, and for every case it’s legitimate, there’s a case where the talent is simply trying to deflect the news before making their debut a few months down the line.

We will simply have to wait and see, but it’d be hard to not imagine Melina thriving and having excellent matches with names such as Asuka, Rhea Ripley, Bayley and Charlotte Flair. She could easily fill a role similar to that of MVP on Monday Night RAW, who made a one off return earlier this year, only to become a heavily featured star shortly after. Do you want to see Melina back in WWE? Let us know what you think in the comment section down below.