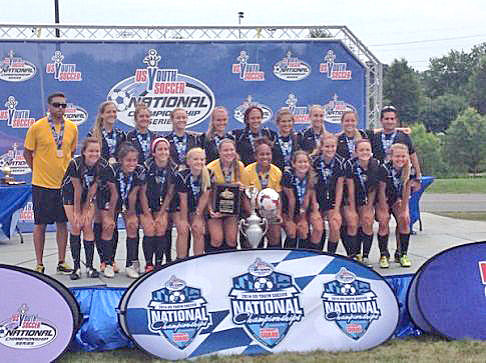 This is the first of 10 stories about the best Long Beach youth sports teams we’ve seen over the last decade. We’ve taken nominations from the community and will release the top 10 in no particular order. Come back next week to read about other club squads that made this historic list.

The Beach FC U16 girls’ soccer team knew how good it was in 2014 after five years of playing together for the new Long Beach club.

“We were complete bad asses,” goalkeeper Imani McDonald recalls. “We knew we were the s*** and we weren’t going to let anyone tell us any different.”

After coming up just short in elite competitions across the country, Beach FC broke through to win a National Championship in Maryland by defeating the Tampa Bay United in penalty kicks. McDonald made four saves in the 3-2 PK shootout.

“The night before the championship game we met as a team and ended up talking for an hour and a half,” McDonald said. “I said, ‘You mean so much to me and as a group, we mean so much to each other, that I think to give your 100% would be the bare minimum.’ Some girls were like, ‘I will die on that field tomorrow! I don’t care!’ And I was like, ‘Relax, we still got life, but I feel that sentiment’.”

Coach Jeff Joyner led this core group of talented players for five years before winning it all in Maryland.

“I think the unique thing about that group is they knew they were good but they also recognized what their role was within the group,” Joyner said. “Nobody needed to do more than what their role was, and they were all pretty accepting of it… That’s not something you come across very often on a teenage girls’ team.”

After years of traveling to cups and showcases together, the 2014 squad was a well-oiled machine on the road.

“Because of their successes they kept winning, kept playing a little longer and traveling a little further,” Joyner said. “We had a pretty big support group of managers and chaperones so the coaches didn’t have to get overly involved and they could kind of handle things on their own.”

“We knew what (Joyner) was about, we knew what the rules were and we knew what we were going to get on these trips,” McDonald said. “Some of our families were there but obviously not everyone’s family could afford to make the trip across the country. My mom wasn’t able to go (to Maryland) but I had a second mom (Debbie Leachman) and (after the National Championship) I remember giving her the biggest hug and just bawling.”

The entire season in 2014 was magical for Beach FC, and it started in Florida where the girls celebrated New Year’s together before winning the Disney Showcase. They went on to dominate the State Cup and Regionals where they didn’t give up a goal or lose a game.

Group play at the National Championship in Maryland that July went as planned and Beach FC met a familiar foe from Carlsbad in the semifinals. Star midfielder Savannah DeMelo scored her fourth goal of the tournament in the 17th minute, but Carlsbad scored the equalizer in the final minutes to force a penalty kick shootout that Beach FC won. That experience came in handy in the finals PK shootout.

“They enjoyed each other’s company socially off the field but it was all business on the field,” Joyner said. “They were really focused. The expectations that they put on themselves were high. I think that’s most impressive part of that team and it’s something I’ve tried to instill in all of my club teams. Just recovering between games… There was never a moment when they weren’t focused either on what had happened or what’s going to happen.”

Most of the 2014 roster is now finishing college and their accomplished soccer careers. DeMelo is an All-American at USC and played in the U-20 Women’s World Cup in Papa New Guinea. McDonald was an All-Big West goalkeeper at Long Beach State, where she was reunited with her National Championship teammates Taylor Bistline, Kaitlin Fregulia, Sarah Maher and Rocio Rodriguez. Joyner is the assistant coach for LBSU head coach Mauricio Ingrassia, who rebranded and relaunched Beach FC in 2008.

“I still talk to these girls all the time, they’re literally my best friends,” McDonald said. “We’ve always said, even when we were younger, that even if we don’t talk all the time there’s no love lost. People have really rough patches. The entire team was there for Sarah Maher’s dad when he passed. I hope to be part of the rest of their momentous occasions in their life.”

This wasn’t the only National Championship that Beach FC won in 2014, and one of those teams could also make our list of the Top 10 Long Beach Youth Sports Teams Of The Decade.

Nominate Your Long Beach Youth Sports Teams Of The Decade