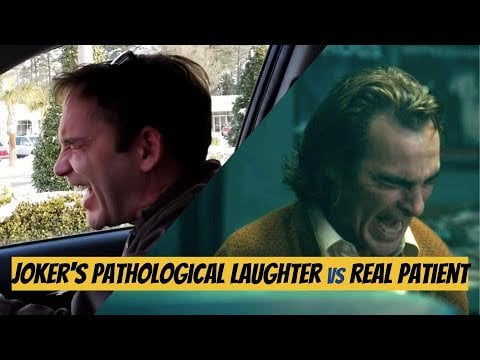 I stumbled across this video and it made me remember a lot of things. It’s about the joker movie and his laughing compared to someone who suffers from the real thing in real life.

Anyways, when I started smoking weed I would laugh like this. I would smoke with my sister and she would get scared because I wouldn’t breath for a long time and id choke. I’d laugh like a maniac and then I would start crying.

I had a horrible childhood. My mother abused the fuck out of us. I never had any friends growing up. I was attacked daily by bullies. No worries, I’m a big boy and luckily I took karate at age 8 so I never got hurt by bullies. Actually I beat them up lol.

I never had any friends from first grade to 11th grade. I was shy quiet and alone. We grew up poor and my mom sent me and my sister to school with unwashed clothes year round. I remember my feet were cracked and bleeding most of my life because of the fungus. I wore the same pairs of unwashed socks every day to school. Everything about me was disgusting and everyone at school hated me because I fucking stank like shit and there wasn’t anything I could do about it.

My mom beat the shit out of us. My sister was a wild child. I was very quiet and reserved. I was a good kid but my mom beat me anyways. She screamed all day every day and it was just a nightmare my whole life.

Even when I joined the military, I was immediately Identified as a worthless sack of shit and I was bullied in the military as well. People don’t like broken abused people like me. They just don’t. They were predators in the military and they wanted me gone. But I did my 6 years and I got out honorably. I was a good hard worker, they just hated me because I was a weirdo to them.

I guess I bottled it all up my whole life. I swept it all under the rug. I didn’t cry about my life when I was growing up. The very few times I cried was while reading Harry Potter as a kid. Because Harry Ron and Hermione were my only friends. I luckily had an aunt who was obsessed with Harry Potter so she bought me the books as they came out from the very beginning. I’m 34 for reference.

When I started smoking weed 3 years ago with my sister i would laugh so crazy. I was laughing because my life was just so bad that it became funny. And then I would feel like I never felt happiness before, and I’d ugly cry like a mofo. I had so many emotions I never felt before because I just ignored everything. Everything was so bad I had no choice but to put it away, hide it under a rug or something lol.

I remember one time I watched a video of cute kittens playing. And it made me bawl like a mofo. I felt like I had never felt happiness before. Watching a video of cute kittens suddenly made me feel this strange feeling I never had. It was so intense and new. I realized that it was a happy feeling and I just cried my eyes out because it was like the first time in my life I had ever been happy.

I’ve been smoking now for 3 years. I don’t even need to smoke. I often stop and just forget about weed. A lot of people I know can’t function without it.

I realized that I have social anxiety and other problems. I am planning to go to therapy soon through the veterans affairs. Before smoking weed, I thought I just had a bad life and so that was why I had problems talking to people and being social and all kinds of stuff.

Now I’m able to introspect and analyze my feelings. I’m able to recognize what’s going on in my head. I thought I had just been denied the tools to live a good life because of my bad childhood. But I was really just suffering from a whole host of mental issues, especially social anxiety which apparently is crippling to many people.

I’m excited to go to therapy. I have been introspecting and connecting to my emotions and understanding my brain for the past 3 years.

I had worked recently on my social skills. I learned to talk to people and be social. But even after learning so much, I still had social anxiety so badly. I could talk to people and they would like me for the first time in my life people didnt think I was some fucking weirdo. But even still the anxiety just kills me every time.

I can’t wait to go and get help with it. Like it’s going to be fun lol. I can have the social skills I learned and get the problems that remain underneath addressed.

I wouldn’t have been able to do any of this without smoking weed. It’s all because of the weed that I was able to realize what was going on and I was able to feel emotions for the first time in my life. Thanks weed you’re the best.

Even in a spiritual sense it has taught me a lot. I mean I’m still a hardcore skeptic atheist, but I am now capable of understanding the spiritual side of things, which I feel is really great. So I’m quite grateful as well that that side of things has been unlocked for me, even if I’m still an atheist lol. I now love to learn about spirituality and religion. It’s super interesting and there’s tons to learn. Before I was just this hardcore atheist with zero perspective and zero ability to see anything else.

So yea, marijuana is great! Thanks weed you’re the best.