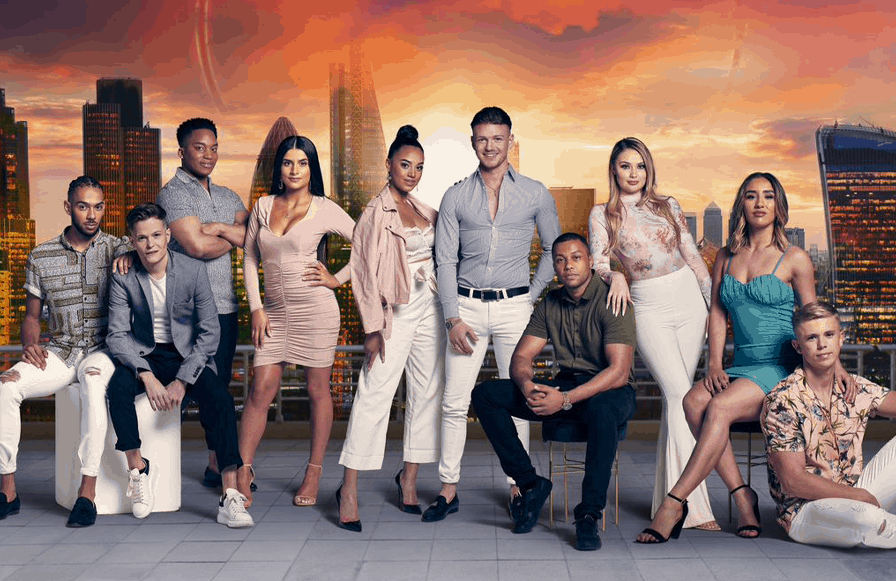 Five couples put their fidelity to the test in Singletown. (Photo ITV/HBO Max)

The weather’s hot. You’re feeling cute. Wouldn’t you love to go show off your tan in your tightest, sexiest outfit at a bar or on a booze cruise full of eligible singles? Well, too bad: it’s the summer of 2020, so you can’t. What you can do is watch a bunch of British people do that in HBO Max’s new ITV import, Singletown.

Not content to dominate the dating-show space with Love Island UK, ITV launched Singletown — developed from an Israeli format — last fall. Five couples, whose relationships are on the rocks for vague reasons (taking each other for granted, “trust issues,” falling into routines) that are probably just stand-ins for “wanting to be on TV,” agree to split up for a few weeks to live “fabulous single lives” in London — five in one apartment (Cityside), and all their exes in another (Riverside). Each group is assigned a mentor: either Joel Dommett or Emily Atack, complete unknowns in the U.S. but (apparently) reality TV fixtures in the U.K. In each episode, Joel and Emily arrange an outing or mixer of some sort for their charges, and either instruct one of them to make a date with someone or send them on a blind date with a prospect of their choosing; generally, both halves of the same couple go out at the same time, and while they’re out, the TV in their apartment lights up with info on their exes’ date for their housemates to report to them when they return. After everyone’s had a chance to mingle with other singles, Emily and Joel stop by to show the housemates video clips of what their exes have been up to. Then the exes face each other at the Love Locket ceremony. Each has two boxes, one of which contains a heart-shaped “love locket” (which actually appears to be a rubbery illuminated heart trinket), and the other of which is empty. If both or either chooses the empty box, they remain in Singletown for another week. If both choose the love locket, they depart Singletown as a couple, love affirmed. If this sounds like Love Island‘s “Casa De Amor” twist spun off into its own series… well, at least ITV is keeping it within the family, and anyway, how many ways do you think there are to iterate on a dating-show format?! Whereas Singletown aired in the U.K. as a “strip” — with one episode premiering every weeknight for three weeks — all 15 episodes of the show’s first  season drop simultaneously on HBO Max.

I feel I should disclose at this point that I am not much for dating shows; I have dipped in and out of various Bachelor franchises, quit halfway through Love Is Blind, and had a brief flirtation with 90 Day Fiancé, but generally I’m pretty monogamous with Married at First Sight. However, even though this isn’t a genre I tend to engage with, Singletown did hook me with some undeniably fascinating elements. For one, as on all dating shows, producers love finding outlandish settings at which their singles can be filmed having a drink. If nothing else, those of us who are still quarantined can appreciate the visual variety of the singletons’ date locations, even if the singles themselves seem just as happy — if not happier — in bars. Here’s Jeremiah and Sian, climbing up a crazy incline to a scenic overlook. Here’s Selin and David, drinking prosecco after hours in an aquarium. Here’s Claudia and Bailey, strapped into their seats at a table suspended from a crane. Sophie and Tash’s double date to an indoor trampoline facility is almost boring by comparison, although it is revelatory of her character that Tash got dressed up in athleisure and then, as far as we see, didn’t actually do any jumping.

Speaking of dressing up: the style choices displayed by both the men and the women are, frankly, bonkers. If anyone’s denim has less than 50% stretch, I would be shocked; they all look like their clothes are painted on. Some might say your skirt should be either extremely short or slit up to your hip bone; not Selin! One woman shows up to a speed-dating situation in a bubblegum-pink latex minidress that Pretty Woman‘s Vivian would have rejected, even pre-Edward, as a little obvious. Even casual looks have ornamental lace and zippers. Also, I know that the British government has its hands full at the moment, but at some point formal action must be taken against the epidemic of orange foundation and matte dusty rose lipstick, because every woman on this show wears both and they are not the right shades for any of them. Still, the escalating insanity of everyone’s outfits gave me another reason to keep going on to the next episode. I’ll also credit Emily and Joel, who are legitimately charming with the (appropriately) limited screen time they get, and don’t seem to goose the action by trying to “produce” any big reality TV moments. I also appreciated the work of narrator Luke Kempner, who gets off a good line from time to time — for instance, when George is trying to comfort his heartbroken housemate Selin, he observes “You need a lad that worships the ground you walk on, not a lad that wants to piss all over the ground you walk on.” “Well said, George,” notes Luke’s disembodied voice. “Anything else?” George: “I’m not just saying this to be [unintelligible; maybe “horrible”?], but you’ve got to learn to love yourself before you love someone else.” Luke: “So deep! And philosophical.” George: “Maybe get a couple of fuck buddies.” Luke: “Yeah, I thought we agreed we were going to cut that one out, guys.”

The problem with this show is what ‘s wrong with most dating shows, which is that people who are dumb enough to be willing to expose their love lives to public scrutiny are too dumb to make for compelling TV. In the case of the Singletown cast, this may be an unfair assessment; some of them may yet jell into interesting people, but right now, they are basically babies. Selin and Jeremiah have been dating on and off for seven and a half years… and are currently 21 and 23. She states that he’s the only person she’s ever slept with; he doesn’t say the same of her, but given that his own assessment of his flirting talents is not borne out by the evidence captured on tape, it seems possible that she is. At one point, Sophie is absent from the apartment for a couple of days, and when Luke says it’s to take exams, I assumed it was for college… but then not long after Emily mentions that Sophie is only 18. She’s been dating 21-year-old George for three and a half years. I’m not here to start a debate about the British age of consent, but it’s hard to get that enthused over whether or not these couples get back together after trying out “fabulous single lives” when one feels these relationships have either naturally run their course or should have ended a long time ago.

Then there’s the fact that the “Riverside” and “Cityside” apartments are in the same apartment building — a fact that’s presented as a big enough deal that it’s mentioned in the trailer. One assumes this will mean the “exes” are constantly running into each other or showing up at each other’s doors to cause drama, but other than one chance encounter outside a brunch early on, it doesn’t happen (at least, not in the first two-thirds of the season); it’s not even clear whether the residents of Cityside and Riverside know their exes’ unit number or have tried to find it out. I get putting them all in close proximity for the sake of the production staff, but if there’s no payoff to it, why bother even telling the viewer?

Finally, there’s the question of exactly how fabulously single these people are willing to get, or are even permitted to get, because if the title put you in mind of GOB’s innovative housing development Fuck City from Arrested Development, I am sorry to report that his bold vision is not realized here. While the common living spaces of the apartments are capacious, there are only two bedrooms — one for the women, one for the men — and they’re all sleeping in single beds. Not only doesn’t anyone come close to hooking all the way up with any of the singles the show’s producers throw in their paths, but middle-school-calibre close-mouthed kisses are treated by some participants as cataclysmic infidelity. It’s not that I especially want these attractive young British persons to betray each other, but if you produce a show and tell me that’s what it’s about, I don’t enjoy being made to feel like a pervert for being disappointed when its stars only deliver the kind of drama one sees in the bathroom at a seventh-grade dance.

Singletown is probably best regarded as an anthropological document of the trends in 2019 British fashion, beauty, outpatient cosmetic procedures (I could spend an hour discussing literally everyone’s lips), slang, mixology, and nightlife. If you’re quarantining with your grandparents and are looking for a dating show that won’t scandalize them, it’s perfect. Otherwise, dating-show fans are probably better off waiting for the next season of The Bachelorette.

All fifteen episodes of Singletown are now streaming on HBO Max.

Writer, editor, and snack enthusiast Tara Ariano is the co-founder of Television Without Pity and Fametracker (RIP). She co-hosts the podcasts Extra Hot Great and Again With This (a compulsively detailed episode-by-episode breakdown of Beverly Hills, 90210), and has contributed to New York, the New York Times magazine, Vulture, Decider, Salon, and Slate, among many others. She lives in Austin.