Former Democratic presidential nominee Hillary Clinton had a fiery response to New York Times columnist Maureen Dowd after her op-ed was widely panned for suggesting a woman hasn’t run with a man on the Democrat ticket in decades.

The New York Times raised eyebrows on Saturday morning when Dowd made a questionable claim in her column, which was heavily focused on the Walter Mondale-Geraldine Ferraro Democratic ticket in 1984 in anticipation of former Vice President Joe Biden’s selection of a female running mate.

“It’s hard to fathom, but it’s been 36 years since a man and a woman ran together on a Democratic Party ticket,” Dowd wrote. “To use Geraldine Ferraro’s favorite expression, ‘Gimme a break!'”

That claim was later tweeted by the Times, which was widely panned on social media for omitting the 2016 Democratic ticket of Hillary Clinton and Virginia Sen. Tim Kaine from the history books.

The tweet was later taken down and replaced with a more accurate description, “it has been 36 years since a man chose to put a woman on the Democratic ticket with him.”

“Either @TimKaine and I had a very vivid shared hallucination four years ago or Maureen had too much pot brownie before writing her column again,” Clinton knocked the columnist.

In a piece titled “No Wrist Corsages, Please,” Dowd recalled the “feminist fairy tale” when Ferraro was selected as Mondale’s VP pick, though noting it “had a sad ending. Cinderella with ashes in her mouth.”

“They wanted to be seen as peers, more TV anchor team than suburban couple. Mondale could not seem paternal or patronizing or use phrases like ‘a ticket with broad appeal.’ Ferraro, who walked faster, had to stop bounding ahead of her running mate,” Dowd described the 1984 paring.

Dowd did refer to Clinton later in the column, writing “Ferraro walked the same tightrope that tripped up Hillary Clinton when she wondered if she should wheel around in that debate and tell the creeping Donald Trump to scram.” 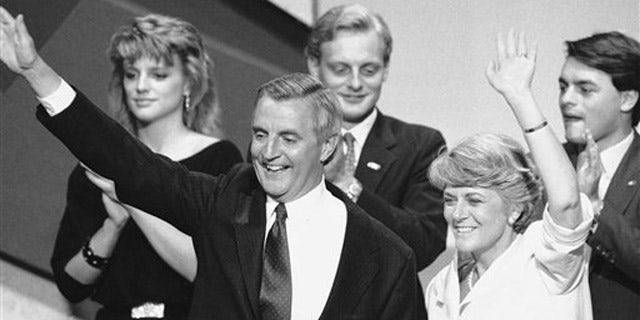 “If she got angry, would she seem shrill, that dread word, and turn off voters? The Mondale inner circle wanted Ferraro to play the traditional running-mate role of hatchet man. But Gloria Steinem warned, “Nothing makes men more anxious than for a woman to be masculine,” the columnist said.

However, Dowd’s “36 years” claim overshadowed the rest of her piece and the error was mocked across social media.

“How does an error this significant get past an editor?” journalist Yashar Ali asked.

“The NYT may have just deleted this ridiculous tweet, but they’re really going to have to delete the entire article,” National Republican Senate Committee senior adviser Matt Whitlock suggested.

The Times eventually deleted the tweet and issued a correction.

“An earlier version of this column incorrectly said it had been 36 years since a man and a woman ran together on a Democratic Party ticket. It has been that long since a man chose a woman to run as his vice president. We’ve deleted a tweet that repeated the error,” the Times wrote.

The correction itself was also ridiculed for saying it’s been 36 years “since a man chose a woman to run as vice president,” ignoring Sen. John McCain’s selection of Alaska Gov. Sarah Palin as his running mate on the 2008 Republican ticket.

That, too, was taken down and the correction was corrected to clarify that it had been that long since a male Democratic candidate chose a woman as his running mate.